JACKSONVILLE, Fla. — Sunbury Press has released an updated second edition of Jacksonville native Mike Campbell’s classic Amelia Earhart: The Truth at Last, the seminal work about the fate of the famed aviatrix. 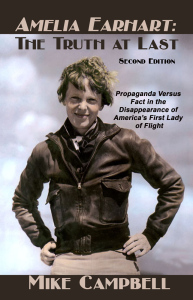 Nearly everything the American public has seen, read and heard in the media for nearly eighty years about the so-called Amelia Earhart mystery is intentionally false or inadvertently misleading. The widely accepted myth that the disappearance of Amelia Earhart and Fred Noonan during their ill-fated world-flight attempt in July 1937 is among the greatest aviation mysteries of the 20th century is an abject lie, the result of decades of government propaganda that continues unabated to this day.

The Second Edition of Amelia Earhart: The Truth at Last adds two chapters, a new foreword, rarely seen photos, and the most recent discoveries and analysis to the mountain of overwhelming witness testimony and documentation presented…

← Ike’s Pennsylvania German roots detailed
2,000 year-old relic kills all who possess it … The Mask of Minos →