About the Book:
Derry Greene is on the road again, investigating the arrest of one of Tramerica’s tour guides in India. He goes to ameliorate the company’s image when the guide is charged with illegal possession of a statuette of the Hindu goddess, Kali, and the death of his Indian girlfriend. In the process, a secret cabal kidnaps Greene as a token American in a lethal plot to destabilize Pakistan. The sister of the murdered girl comes to the rescue. Time becomes of the essence as they try to survive and warn authorities of the dangerous threat to Pakistan. 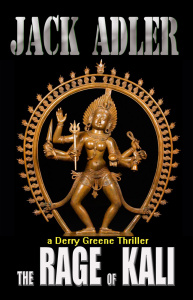 The car came to an abrupt halt right behind the two trucks carrying all the men heavily armed with AK-47s and their equipment. Dawn had broken, and I could see that…