About the Book:
A FAMILY THAT CONFRONTS THE FORCES OF MENTAL ILLNESS, AND LEARNS THAT NO BURDEN IS SO HEAVY AS TO DEFEAT AN ETERNAL LOVE. 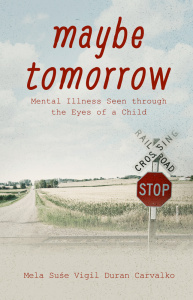 Quite apart from other memoirs, the author captivates the reader’s attention, by painting a portrait of  mental illness through the eyes of a child.  As a child growing up during the 40s and 50s, in the rural Spanish farming communities of New Mexico/Colorado, she recounts her father’s courage and refusal to accept the finality of his wife’s mental illness,  and how he single-handedly raised four daughters, teaching them what it means to survive, drawing strength from the pride of self-worth, and the humility of self-reliance.

Excerpt:
I have come full circle to the land of my father’s birth, Rociada, New Mexico, where I…